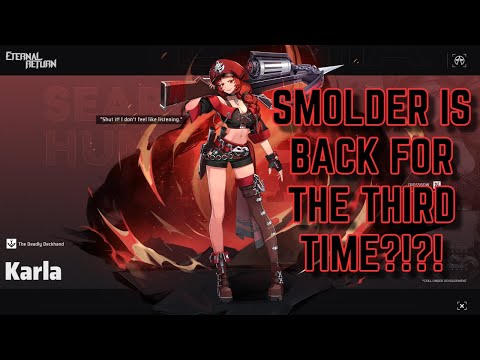 Eternal Return, which started early access in October 2020. The game, which began under the name of Black Survival: Eternity, was one of the hottest topics at the end of 2020. Immediately after the launch, it was not much noticed, but it was a little bit of word of mouth, and in mid-October, the number of concurrent users surpassed 10. The momentum did not stop, and in November, the steep rise, surpassing 50,000 concurrent users.

It would have been nice to continue this momentum, but not. Once the peak, the simultaneous connection number was down, and it was also as rough as the steep rise. In two months, the number of concurrent users decreased to less than 25,000 and fell again for two months. At the time, Eternal Return seemed to maintain a good atmosphere by continuing various attempts and patches, including competitions involving famous influencers, but could not stop the fall.

More than a year has passed. In fact, it is not easy for a game that has been attracting attention once and is far from the eye. Nevertheless, there are many people who feel that the game is worth it, and it means that it is returning or entering. So what hasn’t Eternal Return has changed in the meantime? Compared to the time of the launch, I illuminated the current Eternal Return and analyzed why it was resurrected again.

I haven’t done anything and never die

Of course, you can see that there were many new main screen UI reorganization and many new experiments. Compared to the beginning of the launch, the characteristics were added, and many of the changes were changed in in-gameplay, but the biggest change point was ‘drone’. In the past, if many experiments were gathered in one area, they could not farm properly, and they could not be able to move to other areas and to have changed items. To this end, there were elements (ex. Flowers) that increased the amount of ingredients and changed the farming method, but the drone was noticeable.

Even if you don’t eat items, you can deliver it using a dr1. You can use it to skip and deliver the area you need to visit, or you only need to eat one or two. Thanks to this, my play, which was shouted not to eat only carbonated water from the beginning of the night to mid-day, was greatly improved. In fact, this drone was introduced not far. In early May, the fifth season was finished. Nevertheless, the tempo is so fast that the farming methods have been greatly improved and changed since then.

Already, most of the route items that most of the experiments have been aimed at during the day day and night, they are mostly acquired. Even if it’s a bit twisted, there are some items before the first day of the night. Thanks to this, there is almost no situation to shout ‘Lucky Mangem’. I couldn’t do anything, and I picked up and made item and made it. It means that the negative experience has been reduced.

Of course, such irrationality is not completely g1. Still, some people use only two routes to hunt the experiments with a weapon, but most of them have a priority to farming. The items are not properly equipped, but if you can overpower your opponent, you still have a lot of play. There is still a big solo mode that is unreasonable, and there was a great improved feeling of irrationality in the deuce quad team game.

The biggest experience difference in Dew/Squad Mode is the revival system. Since the resurrection system has already been introduced once, the response was not good, and the resurrection system settled in the current situation is until the second day by Du/Squad. If the team members survive with the effect of ‘rapid playback’, they will not be eliminated and provide the opportunity to return to the game. If the team members decrease due to the early death in the survival game, they are very angry and uncomfortable with the dead or the remaining team members. This is a chance to recover. Therefore, if the defeat angle is clearly visible in one other, he may choose to escape, and on the contrary, he will be bored to join with a long fight and dribbling team member.

The biggest improvement is that when I play with a friend or acquaintance, I only watched the defense of the ranks before the first night. Of course, since the 3rd day, it will not be a rapid reinforcement, so this tendency will continue. In addition, rapid playback will evaporate major object materials, but the production item remains. It means that high value items are ‘copy’ in the game, so there is room for benefits even if you do not participate in the object fight when you are good at engaging with your opponent.

The biggest thing to watch with these resurrection and farming changes is that the importance of ‘object’ was emphasized. In the past, Eternal Return was the largest object with two lives and weekly, which appeared from the night of the night, and afterwards, it was possible to rely on the ‘random’ of wildlife droptem. As a result, the reason for the gathering and fighting was the only tree of life and a weekly, and the position was always fixed except for the weekly.

In other words, the place and time to fight were determined in all games, and in fact, the second day of day and day 3 was the time of ‘maintenance’. In the end, this part was the main fighting grounds around the hotel-forest, and most of the time, most of them were the place that went through to catch ‘wild animals’. So there were teams that were never bumped up in operation, and no other team was visible, so I had to think that it would be around at this point. It is a long time ago that only the game was started before the ranking game started.

But now, the overall change has been stably in these objects. First of all, the tree of life on the first night was divided into two hotels and cemetery, and a new object monster called ‘Alpha’ appears during the day. On the third day, a monster called ‘Omega’ will appear, and the last three nights will appear. Omega and Alpha, which were added in July last year, divided Mithril and POSCON through patches, respectively. In particular, Alpha provides one of the items that can be combined with Mithril, so one Mithril item can be confirmed as soon as you catch it.

Weekly has been deleted, and VF blood samples are deleted from the bear drop table, and wolves no longer provide expensive items. And now major objects are clearly divided and random. There are two trees of life, divided into hotels-cemetery and hospitals, and forests, and ‘meteorites’ are now four times away from the designated maps, not Gacha items. Alpha and Omega’s Regen area is also random, and the location is confirmed 1 minute before the creation. Weekly still appears from the institute to wanduce the map.

This is the biggest change. The fixed battlefield is virtually distributed, and the battle and competition areas are different. The ingredients that provided randomly are dynamic, with a definite drop and distributed. According to the combination, each object has a different value and the operation changes dynamic and flexible. It is noticeable that the value of the items using each object by subtle balance is also changed. Now, the value of the meteorite is too high, but I think there are differences depending on the individual’s judgment.

One more thing here. Hotels, downtowns, hospitals, and cathedrals feature a ‘transmission console’. This is a special object that allows players to order through ‘credits’ accumulated while hunting for mutant wildlife, surviving and killing other experiments and objects. If you have built up your credit well, you can get a definite way without an object fight.

Instead, there is a 20-second transmission time, and when the transfer is notified, the map is notified, so people gather in a fight. This means that additional ‘fighting sites’ can occur at any time, along with the dynamic arrangement of existing objects. In addition, the object with the most powerful value of VF blood sample can also be summoned, so it is possible to aim for high values without having to sag Dr. Weekly.

These changes are not easy to learn because of the heavy heating, but it has certainly brought about changes in the battlefield. As the object marks on the minimap is also provided, it is possible to notice and establish a strategy later, and as the banned area is created, these battlefields gradually narrow and become more frequent. As you have given you a chance several times, the engagement is more frequent. In addition, in the duo/squad, the temporary safety zone setting just before the last ban was changed, so the fight was shared twice.

Instead of reducing the injustice of dying without doing anything, he created a flow of inducing a ‘fight’ instead of giving a new opportunity. Of course, the tension in solo mode has become more exciting.

In addition, there were many changes. The cumulative way of production skills, the balancing of various experiments, and the new items continued to appear, and there were also additional additional high value equipment. In addition, the ‘additional damage’ method when the basic attack has disappeared, and the increase in fixed skill damage has also changed, and the overall damage formula and defense have changed. Personally, my favorite thing is the reorganization of the recovery item. The recovery amount of recovery items, which was ignorantly high, was reduced, and the overall recovery was also adjusted.

Here, when ‘characteristics’ are introduced, the damage is greatly reduced when the attack is taken momentarily.