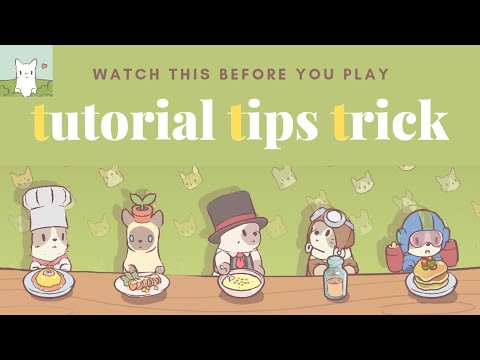 Cats and soups are a game that is led by 20 million LAND deacons. In the game, there are countless cats who are melting even if they are watching on a lawn that seems to be in the fairy tale book. Cats who work hard to make carrots with both hands and listen to the trees are so lovely that they don’t know when time passes.

Surprisingly, this cute, warm and lovely healing game is Kim Dong-kyu of Heida, who has made heavy and hardcore games. He said his family had a big influence on making a comfortable game. In particular, the opinion and eye of the daughter, who was seven years old at the time, was an opportunity to choose a cat.

Cats and soups, who have captivated many LAND deacons, are now working with Neowiz to expand their IP. Kitipo has a variety of contents through a dedicated YouTube channel, and it has received a good response enough to secure nearly 500,000 subscribers. What is the start of cats and soups that have achieved 20 million downloads of global downloads, and what is the beginning and what is the next step? In an interview with Kim Dong-kyu, he heard about the story.

Less than a year later, it has achieved 20 million downloads. Perhaps it has increased more now. I’m curious about my feelings.

I feel good (laughs). I don’t think that the number of downloads is completely directly related to the game. There are a lot of better games. Thanks to the business or marketing team, there seems to have been a good achievement.

I didn’t expect it to be loved so much. Although the game itself is long, it is a game that can be finished quickly to finish quickly. While playing games, I thought it was a game that looked like a clock, but I was so loved that I was really loved.

From the standpoint developed by yourself, you think it’s your game, but you think that the point of cats and soup led so many people.

I think the first impression of the game, including visuals, is comfortable. I think there is a difference between comfortable graphics and good graphics. After seeing the effects, it’s not such a shocking and good visual game that keeps in your head, but The first impression that can be crushed seems to have played a good role. He praises the graphics that the graphics are good, but there are a lot of good games and great games.

I wonder what was the reason for the development of cats and soups and where I got the idea. I heard that there was a daughter’s influence.

There’s a lot of instruments, but I had a desire to make a break. I also received a recommendation or suggestion around me. I was tired and tired because the previous games were a little hardcore. With the people, I thought it would be a more comfortable game to make next time. The daughter’s influence was great.

Personally, I think it was so good that I had been hit by any genre. What is the reason for choosing a neglected genre?

I thought it was a good genre to make it, and it was a good way to make a game in a situation where there were children. If you have something on the screen, you don’t press and see it.

And if I was going to make this, I wanted to make a game of the most prominent genre of art and visuals. One of the features of the neglected game is that it is influenced by the screen visuals. In the case of strategic games, efficiency is the most important, and games that require action games or physicals should focus on manipulation without seeing something on the screen. But the neglected genre is a game where you have to watch a lot of screen, so the visuals are really important.

Is there any regret for any other genre after the game was so popular?

I don’t have to make another game. I want to keep making something new. I think I would like to make something else, no matter what genre I made a cat and soup. Then, if you miss your hand, it will make it heavy again.

Isn’t it difficult to make such a variety of games? As the genre keeps changing, I think it’s hard to use the accumulated experience.

I think it’s harder to sell only one well. I keep getting different and interesting, and I’m developing several genres. The reason for developing various genres is that new things are fun. To continue the follow-up series of existing works, you have to have considerable patience and devotion. I don’t have enough (laughs).

Is there any most memorable work or happening in cats and soup development?

There was no impact incident. The development process was calm like a game. Should we handle it, put the grass, or do the lawn to blow in the wind, and I’m satisfied when I’m thinking about it.

Making a game is a job, but half a hobby. If you don’t develop, you have to find something more fun, but I haven’t found it yet.

So what are you more enjoyable for developing a game and playing directly?

This is true not only in games but also in animation. Looking at the well-made animation, I think that I want to put that wonderful visuals or visuals in the game. As a result, I couldn’t enjoy the afterglow of the work.

The core of cats and soups is the cat. What did you care most when designing cats?

I don’t draw all the cats at once. I make one and program it to make other cats by adjusting all the roads, body shape, skeleton, tail of the hair by programming. You can’t make it. To do that, you have to find another way.

The most important thing to worry about creating a new cat is that there is no heterogeneity or technical problem when you are with the existing cats, and if the deacons who raise the real cats may have a sense of rejection. In particular, the latter is not solved by himself, so he hears opinions everywhere. In fact, I don’t raise cats, so I get feedback and fix it.

What do you think is the characteristics of the art of cats and soups and visuals.

I think it’s a graphic in 2D and 3D, the ambiguity somewhere. The graphics of the cat and soup are still ambiguous enough to be asked whether they are 2D or 3D. I can see the angle, so I feel unique and amazing.

The motion of cats is really detailed and soft. But it is not too much. What is the most worried and hard work in the expression method.

And since the point is fixed, I set the most beautiful and decent motion and angle at that point. From the beginning, when the cat boils the soup, it will show some way. It is a big part of the art that can make it easier for artists to develop their own games. It is easy for one or small developers to do it.

How much did it take to envision and release the game.

It took about a year. As I felt, I didn’t have any idea because it was made as I wanted to do it. Rather than going through the planning stage, I drew a cat, placed it, and started like that. It can be fun, but it was a one-person development, so I could do everything I really wanted to do.

** In fact, it’s a really simple game. This is the opposite of the recent neglected games. I wonder if there was no anxiety as I released this simple content-oriented game.

Of course there was anxiety. I was worried about whether it was a game.