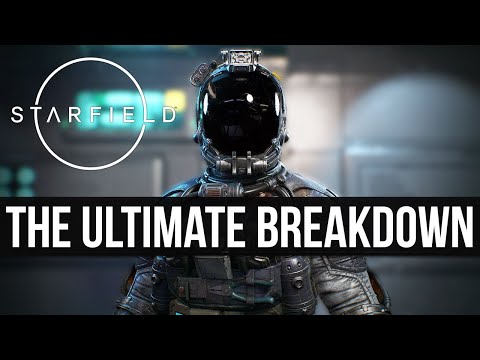 As part of the recently completed Xbox & Bethesda showcase event, Bethesda finally showed the gameplay and spoke about the various features of its new hotly expected game-Starfield. In this article, we will study everything that is known about it, and on the basis of this information we will draw certain preliminary conclusions.

By the standard scheme, let’s start with the simplest basic information:

In the same paragraph, it is also worth considering such important components as graphics, performance, animation. Based on the only recording of the gameplay, the level of graphics cannot be called nectogen in comparison with the capabilities of the same Unreal Engine 5, but the game looks extremely attractive, and in particular it is worth noting the frames inside various rooms. And from the performance point in the video, significant fraud drawings are noticeable, although all this can be attributed to the factor to the release of at least 6 months.

The level of facial animations compared to all previous Bethesda games has become much better, and in general, the shown animations look acceptable, with the exception of some types of weapons. In general, the current demonstrated version of the game in terms of all these factors looks acceptable, but since the release is very far away, everything can change for the better or worse. And yes, as always, the main thing is not worth lifting the stand of waiting to heaven.

World of the game

Starfield is primarily a game about space and the study of planets, moon. As it became known, in the game there will be more than 1000 planets and moons, which are part of more than 100 solar systems. You can most likely study planets along and across, because this process has been tied to a completely standard research system in which it is necessary to collect information about local resources, flora and fauna. In addition to this, some planets have the initially unknown features of Traits.

Based on the presence of 1000 planets, we may well get a game with a huge open world, as in No Man’s Sky, but so far there is one unknown factor, which is perhaps the most important feature of such projects. Firstly, we were not shown the game process of landing on the planet, but only a beautiful video with the take-off of the ship from the surface. Secondly, the menu of choice where to land leads to undesirable conclusions. In the worst setting, players will not be able to calmly fly on the planet, and the process of landing / take-off will be presented in the form of a small cat-scene.

Regarding the planets themselves, based on the interview from November 2020, they will most likely be created using procedural generation, and the most important places \ objects-by the help of hands. By the way, only people can quite inhabit them, because even in the video, in addition to the fauna, other alien races did not show, perhaps they will not be at all (besides mysterious plot structures).

An integral part of almost all space projects is the ability to go into space, and Starfield is not an exception to this rule. This component of the game at least includes cosmic battles, made according to the already standard and, perhaps, the simplest scheme:

In addition to battles, in space you will definitely stumble upon asteroids, which most likely contain resources and space stations. However, most of all I was struck by and greatly interested in the possibility of shaving to the ship, because with proper implementation it expands the functionality of the same cosmic battles. For example, you disabled the enemy engines, attached and took on boarding, moving from a space battle to the ground. In general, one of the questions that arose after watching the recording of the gameplay refers to Is it possible to enter the enemy ships, even if they are on Earth?

Another simple component of Starfield, perhaps, will immediately remind many No Man’s Sky. Being on the surface, alone or together with a partner (there are already hints for this), you can scan the surrounding area to collect data, use the drill resources and, of course, with the help of weapons to fight against hostile fauna / pirates.

Based on the demonstrated interfaces, it is possible when landing on the next planet will have to take into account indicators such as the level of gravity, temperature and air availability. With proper implementation, the presence of air suitable for breathing can even affect the equipment equipment, that is, it will come to the surface in a spacesuit or not.

As for the battles on Earth, everything is done on a more or less standard and again very simple FPS scheme:

Conditionally, all the well-known Starfield RPG elements can be divided into large and small systems, we will start the study with the latter:

Skills -standard character development system, which has absorbed all the best of all the games of the company. The tree of skills (unless, of course, you can put it) into 5 main categories-physical force, society, battle, science, technology, and each of them contains about 16-17 options. Skills enhance certain things of the corresponding categories or discover new opportunities. For example:

Some or perhaps even all skills can be pumped several times by spending, while skills glasses. However, before increasing the level, you may first have to perform a certain test, one of the simultaneously interesting and problematic features of the skills system. If you still have to carry out tests to increase the level, within the framework of the project with a bunch of worlds, this may well turn out to be the same splinter in one place.

For example, in a ballistic skill, the test reads kill 250 opponents from ballistic weapons, and something tells me that tens of minutes or even hours will take this task.

Kraft -sed from two components: research and craft itself. All studies are divided into 5 categories-farmacology, food and drinks, the development of the base, equipment, weapons, and contain drawings, for the study of which you have to collect certain resources. As for the craft, they showed only improvements for weapons in the form of additional modules of the barrel, the trunk of the handle, optics / sights, and it is not clear whether it is generally possible to crash things themselves.

The player’s base -Is allows the player to create his own base on the planet. Judging by the shown option, the functionality and the main purpose of the system are not too different from the analogues from Fallout 4 \ 76. Perhaps the most interesting features of this system include generating resources and hiring the NPC to control the base.

The ship -in Starfield developers will allow the player to create his own ship from scratch, combining the main modules, ranging from the engines to the cab. Perhaps I liked this RPG-component most, because when creating the ship, not only the appearance changes, but also its characteristics, such as the strength of the case / shields, the range of the jumping engine, the maximum speed, the size of the cargo compartment, etc.

Among other things, as in the case of the base, the player can hire the right crew of the NPC, and I hope that the developers correctly implement their interaction with the ship’s systems. For example, having equipped the ship with turrets, the NPC will use them in battle, thereby simplifying the battle with several goals at once.

Unfortunately, it is not yet clear how free this editor will be, that is, whether there are any restrictions on size and shape. And yes, the first thought that arose in my head, whether it is possible to create a millennial falcon.