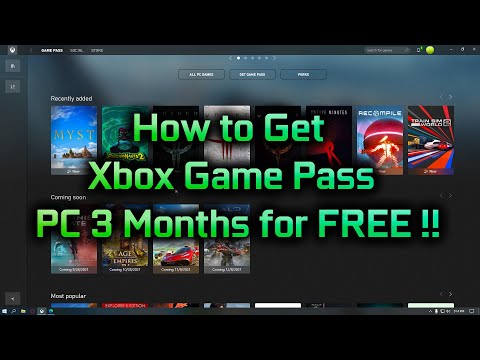 Xbox Game Pass Not only is it a must for those with a Microsoft console, but it is also very important for PC users. If you have a computer, but you still do not have a subscription to this service, do not worry, since Xbox is offering three free Game Pass. How? Well, You just need to have played any of the most important launches of the company in the last year.

Through the official service site, Xbox has revealed that all PC players played Halo Infinite, Age of Empires IV or Forza Horizon 5 before February 28, 2022 , can redeem a code for Game Pass in PC of three months completely free on this site. It is important to mention that this is an offer that is only valid for all those who do not have an account to this subscription.

“Thank you for playing and supporting the success of our most recent PC games at Xbox Game Studios! If you have played Halo Infinite, Forza Horizon 5 or Age of Empires IV on the PC since its launch until February 28, 2022, we offer you a 3-month test of PC Game Pass (only for new members) by way of gratitude “.

Are you also valid for those who only played the infinite halo multiplayer? Indeed. However, if you enjoyed any of these three titles through only consoles or cloud, you will not be able to redeem this free code. This is a promotion completely dedicated to PC users.

On related issues, an insider reveals the possible release date for the Xbox Game Pass family plan. Similarly, Microsoft would be working on a new chip for Xbox Series X.

This is a great promotion that PC users can not miss. Best of all, is that surely you played the multiplayer of halo infinite when it came out, as it is free-to-play, so you are only a couple of steps to have access to a large games library of all kinds.