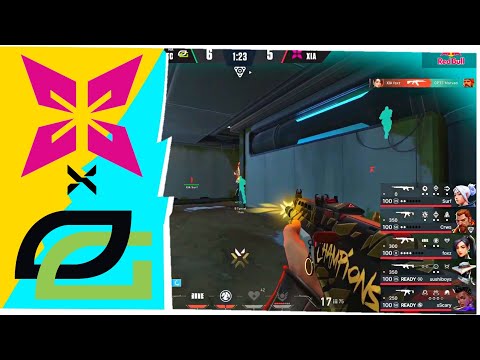 One more day of competitive more cardiac in the Riot Games shooter, with the last day of classification of phase 1 in the international tournament, we will see four teams by measuring themselves to find the last two quotas to advance the tournament.

Na destroys the dreams of Thailand

The first series of the day began with a duel between Optic Gaming representative of North America Facing Xerxia representing Thailand , playing from par on a map of Fracture selected by the Asians where they proposed An aggressive attack where Thanamethk “crws” Mahatthananuyut was a key piece with Bridge to give an opening in the tickets that the Thai team did, on the other hand the devil mode was activated by JaccoB “Yay” Whiteaker to punish as executioner to its rivals on a map tilted to attack, optic gets 6-6, changing sides and now with the attack of the Americans began with their slowest style, calming the situation for the fast lane of a neon in the hands of Victor “Victor” Wong who put rays on all sides so that Thai suffered significant casualties in several rounds, despite the defense and profits that Panyawat “Sonhiboys” Subiriroj placed would not be enough leaving The first map A 13-9 in favor of na.

On the second map of Haven where Optic started in the attack to put several rounds to the thread that decompens the mental that the Xerxia team had, seeking to propose something with the operation of Thanhart “Surf” Rungapajaratkulera denied On several occasions, letting the North America team score 9-3, in the second half and with the Thai attack proposal things seemed to change but Jimmy “Marved” Nguyen and his omen , who has given that Speaking, I would not allow much managing the opponents and dark mantles that were surprising, the team of Optic Gaming was wearing the map and the series with a 13-6 to get the pass to the next phase of the tournament

The ninjas fall before the Zeta Team

A series that would also have a team in the next stage of the tournament, now we would see Brazil represented by Ninjas in Pyjama fighting against Zeta Division of Japan placed on a first map of Split selected by the Japanese where Brazilians stuck strong the first rounds with an Alexandre “Xand” Zizi who used a phenomenal fashion, achieving important lows in the rounds but did not create such a broad difference when closing the first half with a 7-5, Changing the roles Now the Japon team put a defense that cost little break for the aggressive style of the ninjas, a shota “Sugarberry” Watanabe who used NIP Put the music at high volume, getting the map 13-6.

Going on the second map we would move to Icebox, selected by NIP, To know if the Japanese could answer or the Brazilian Samba sound with the victory, starting with the defense for Zeta that resetting his mental to give good show within the first half where Yuma “DEP” hashimoto would be the protagonist with the storm of knives of Jett that would give him very good low to leave things very favorable for them in the first half with a 8- 4, The second half was cardiac because the Brazilians did not let the map end without fighting, despite going down they could punish Japan with the power of the Sova who handled Cauan “Cauanzin” Pereira complicating the map for his Rivals but giving possibilities to your team to achieve more, however, dep and sugarz3ro would close the second map 13-10 and tie the series 1-1.

Reaching the third map where things looked very favorable for the Brazilians, where his aggressive game was present from the first round managing to take an early advantage where Gabriel “Bezn1” gives coast would cause havoc with a Cypher Too little casualties and use the neural assault in a very concrete way, a first half that would end 7-5, Now changing the team of the Japanese began to put things in their favor, managing out a lot of profit to the * *********** ASTRA The snapshots gave him the opportunity to achieve the 14-12 and his pass to phase two.

A day full of emotions where things were complicated for the four teams, leaving two clear winners who, despite the items suffered achieve a stage that will be much more exciting than we have already seen, with a few hours of
Difference to start the stage that you can define the best teams that will seek to be the winners of the Stage.
We remind you that all VCT Master’s coverage is here at mgg.