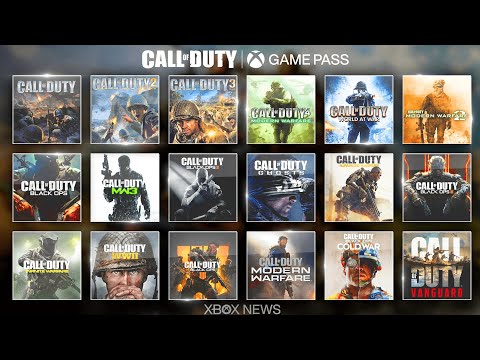 Apparently, a lot of Call of Duty games have appeared on Xbox Game Pass. Earlier this year, Microsoft announced its intention to buy Activision Blizzard, the editor and franchise owner such as Call of Duty. Once this happens, Microsoft will have the total ownership of the beloved FPS series and you can do what you please. It could cause Call of Duty to be exclusive to Xbox, but Microsoft has suggested that it will keep the series in PlayStation, at least in the foreseeable future. Apparently, the important changes in the series already began to occur under activision, although apparently are not related to the Microsoft Agreement, since the Technological Giant has nothing to say about what activism does until the agreement is closed. According to reports, Call of Duty will take a year of rest in 2023, which is expected to be after the agreement ends.

That said, it does not seem that there is a shortage of Call of Duty games so that people play. Twitter ModernWarzone User reported that a lot of Call of Duty games appeared on a page of Xbox Game Pass, although none could be obtained through the service. However, this could suggest that Microsoft is about to add some games at the service soon or deduct them through the service. Regardless of whether this is just a failure or an early list, it can be expected that most, if not all, the Call of Duty games will be at Xbox Game Pass in the future. It is likely that Microsoft wants to presume from its subscription service as much as possible with this agreement and what better way to achieve it, putting there the greatest FPS franchise.

It is likely that the future Call of Duty games will also reach Xbox Game Pass on the first day, as well as the other Microsoft’s own titles. Mass games like _ Steler_ and The greater scrolls 6 are expected to reach service at no additional cost when lancing, which says a lot about the value of the subscription service.

Will you play some Call of Duty game when you arrive at Xbox Game Pass? Let me know in the comments below or contact me on Twitter @Cade_ONDER.